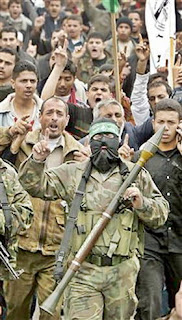 "As Israel withdrew its forces from the northern Gaza Strip on Monday after a two-day assault on Hamas militants, and as Palestinians emerged from their houses to inspect the damage, Hamas leaders seemed to be following the playbook of their Lebanese ally, Hezbollah, in its 2006 war with Israel.

Fawzi Barhoum, a spokesman for Hamas in Gaza, said that like Hezbollah, Hamas had "gone from the stone to the rocket."

"What we learned from Hezbollah," he said, "is that resistance is a choice that can work."

The clearest example of echoing Hezbollah came on Monday when thousands attended a so-called victory rally, and Mahmoud Zahar, an influential Hamas leader, briefly came out of hiding to tell the rally-goers that his organization would rebuild any house that had been damaged by the Israeli strikes.

Holding up his group as the source of reconstruction as well as resistance is precisely the message that brought local and regional acclaim to Hassan Nasrallah, the Hezbollah leader, when his organization faced down Israeli attacks in the summer of 2006 through rocket barrages on Israel......

But more than 200 rockets have been fired at Israel since Wednesday, according to Israeli military officials, including at least 21 longer-range Katyusha-style rockets, which are manufactured outside Gaza and brought into the strip. Palestinians and Israelis see the use of those rockets as another illustration of the growing similarity between Hezbollah and Hamas, the militant Islamic organization that controls Gaza.

"We are very concerned that the role model for Hamas in Gaza is the Lebanese Hezbollah," said Mark Regev, a spokesman for Israeli Prime Minister Ehud Olmert, when asked about parallels between this conflict and the one with Hezbollah.

"I have no doubt that the people who built Hezbollah's military machine are now building the military machine of Hamas," Regev added. He named Iran, where Israeli security officials say the longer-range rockets used by both Hezbollah and Hamas were made.

Israeli officials say that Hezbollah not only is a model for Hamas but also provides it with training and logistical support.....

In an apparent bid to remain relevant in Gaza, and in an echo of the actions of the Lebanese government in southern Beirut last summer, Abbas also instructed his government on Monday to allocate $5 million to compensate Gaza residents whose properties were damaged in the Israeli campaign......"
Posted by Tony at 5:53 AM