Revealed: the US plan to start a Palestinian civil war 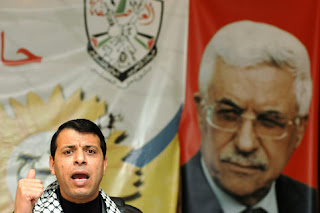 "United States officials including President George W. Bush and Secretary of State Condoleezza Rice participated in a conspiracy to arm and train Contra-style Palestinian militias nominally loyal to the Fatah party to overthrow the democratically-elected Hamas government in the Occupied Palestinian Territories, an investigative article in the April 2008 issue of Vanity Fair has revealed. [1]

The allegations of such a conspiracy, long reported by The Electronic Intifada, are corroborated in Vanity Fair with confidential US government documents, interviews with former US officials, Israeli officials and with Muhammad Dahlan, the Gaza strongman personally chosen by Bush.......

While it has been known that the US engaged in covert activity to subvert Palestinian democracy and provoke Palestinians to shed each other's blood, the extent of the personal involvement of top US officials in attempting to dictate the course of events in Palestine -- while publicly preaching democracy -- has only now been brought to light......

While the United States and Israel were the driving forces behind the civil war and coup plot, others had a hand including several Arab states and their intelligence services. "The scheme," Rose writes, "bore some resemblance to the Iran-contra scandal" in that "some of the money for the [Nicaraguan] contras, like that for Fatah, was furnished by Arab allies as a result of US lobbying.""
Posted by Tony at 4:27 AM