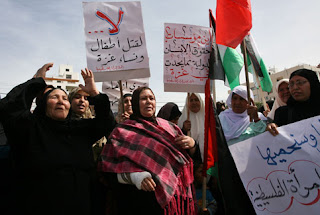 "The 8th of March comes this year as Palestinian women face very difficult and harsh circumstances due to human rights violations perpetrated by Israeli Occupation Forces (IOF) against Palestinian civilians, including women. In recent days, Palestinian women have had paid a high price due to reprisal actions by IOF against Palestinian civilians and property.....
On this occasion, PCHR reiterates its absolute support for Palestinian women in the face of the severe circumstances they face due to the practiced of IOF, and:
* Calls upon the international community to immediately intervene to stop crimes and human rights violations perpetrated by IOF, which leave tragic impacts on the Palestinian people, especially women.
* Calls for lifting the siege imposed on the Gaza Strip as it is a form of collective punishment against the Palestinian civilian population in violations of international law and humanitarian law.
* Calls upon the Palestinian National Authority to stop violence and the misuse of weapons.
Calls for combined efforts by the society and institutions to ensure serious work against all forms of violence against women."
Posted by Tony at 12:15 PM