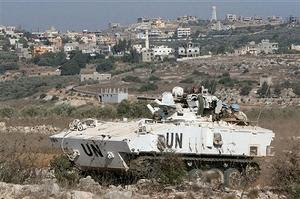 "13/05/2010 The Kuwaiti newspaper “Al-Rai” quoted “very close sources to the UNIFIL – U.N. Interim Forces in South Lebanon” as saying that a UNFIL topographic force had secretly went to the “Slouki” Valley in south Lebanon with a GPS-equipped laptop and without official authorization from UNIFIL chief Alberto Asarta Cuevas, to record “coordinates of covert defensive stations for the resistance.” The Kuwaiti newspaper added that the UNIFIL force did not request a Lebanese Army backup. The sources also told Al-Rai that “residents, including Hezbollah activists, blocked the force believing what this UNFIL unit was doing only served Israel, especially that the Slouki Valley is known for its sensitive military nature.”
The Kuwaiti daily report also quoted sources it said were close to the resistance in Lebanon as questioning the goal of this operation. “This could also be a provocative act to draw a reaction that would later be exploited against the resistance,” the source said, according to “Al-Rai.”...."
Posted by Tony at 4:11 AM