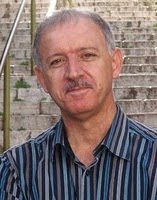 Ameer Makhoul, a Palestinian citizen of Israel, was arrested in a dawn raid at his home in Haifa, northern Israel, by the Israeli security services and police on 6 May. He has been charged with "contact with a foreign agent" on the basis of “secret evidence”.

"His arrest and continued detention smacks of pure harassment, designed to hinder his human rights work. If this is the case, we would regard him as a prisoner of conscience call for his immediate and unconditional release.”....."
Posted by Tony at 8:46 AM