Hey, Who Said the Arabs Can't Do Anything? Lebanon Back on Top for Hummus World Record! Celebrate Now! 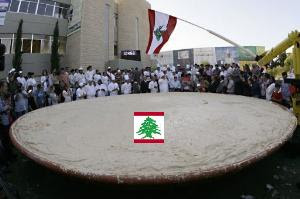 Al-Manar
Read it and Weep!
"09/05/2010 Lebanon on Saturday claimed another victory in the continuing battle with Israel over which country can make the largest plate of hummus. More than 300 chefs helped set the new record for the largest serving of the chickpea dip. A Guinness World Records representative confirmed the plate weighed in at 10,452 kilograms.

In January, 50 chefs in the village of Abu Ghosh near occupied Jerusalem mashed up more than four tons of hummus, beating a Guinness record set in Lebanon just months previously. With a 10-tonne hummus record under their belt, the Lebanese have now set their sights on falafel [WATCH OUT WORLD!] . On Sunday, they will try to set a world record for that as well."
Posted by Tony at 8:08 AM