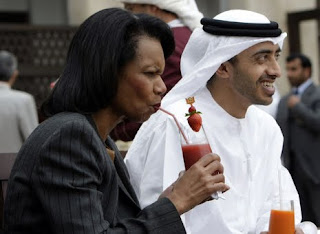 "A British woman jailed for kissing a man in public in Dubai today spoke of the "hypocrisy" of the Emirate's strict decency laws.

Charlotte Adams was arrested with Ayman Najafi last November after a local woman complained they had been seen kissing on the mouth in a restaurant.

Ms Adams, an estate agent, and Mr Najafi insisted they had given each other only a peck on the cheek but were sentenced to a month in prison by a Dubai court last month.

The 26-year-old, from Mersea Island, Essex, served 23 days and was freed on Friday and deported.....

She said hotels in Dubai regularly offer free alcohol, particularly to women, though drinking in public is still officially illegal in the Gulf state.

"Everyone gets so drunk they forget where they are, particularly the Westerners, which is when their behaviour can become dangerous legally."

The British Embassy issued a formal "don't-do" list on its website, warning against drinking and kissing or holding in hands in public in Dubai...."
Posted by Tony at 7:31 AM