"Last Thursday, in the early hours of the morning, a Palestinian community leader's home was raided by Israeli security forces. In front of his family, the wanted man was hauled off to detention without access to a lawyer, while his home and offices were ransacked and property confiscated. 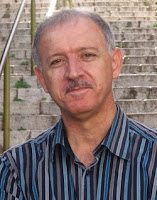 While this sounds like an all-too typical occurrence in West Bank villages such as Bil'in and Beit Omar, in fact, the target in question this time was Ameer Makhoul, a Palestinian citizen of Israel and head of internationally renowned NGO network Ittijah.....

Hussein Abu Hussein, the lawyer for both Makhoul and Said, stressed the role of someone like Makhoul in being a prominent advocate internationally for "the need for accountability" – in other words, "the state has enough reasons to stop this voice". Mohammad Zeidan, of the Arab Association for Human Rights (HRA), says that the arrests are "clearly political". He believes that for some in Israel, the work being done by NGOs and Arab parties on the international level is "crossing a red line" – "they want to remind us that this is not a democracy"."
Posted by Tony at 9:12 AM