Many Voices Singing One Song 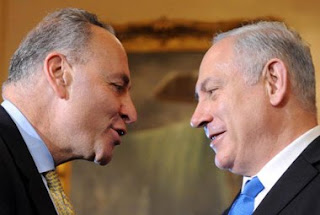 "Several weeks ago the redoubtable Charles Schumer of New York announced that Yahweh himself had anointed him Israel’s defender in the US Senate. In a radio interview Schumer explained "You know, my name …. comes from the word shomer, guardian, watcher. My ancestors were guardians of the ghetto wall in Chortkov. And I believe Hashem (God) actually gave me that name. One of my roles, very important in the United States senate, is to be a shomer — to be the shomer Yisrael. And I will continue to be that with every bone in my body …"

Schumer’s very interesting comments, suggesting that he has a rather narrow view of his responsibility to represent all the people of New York State, were not reported anywhere in the mainstream media.....

Are these people dangerous? Well, maybe. Many foreigners have come to the United States to make their fortunes and there is nothing wrong with that. But, in this case, there would appear to be a certain unanimity of viewpoint and a marching in lock step that is just a tad disconcerting, particularly as it has helped shape the foreign policy narrative. There is no deviation from hard right Likud positions, never any criticism of Israel, and always complete agreement on the need to confront Iran militarily. One might reasonably ask to what extent it is a coordinated effort to steer Washington in a certain direction, not unlike the neocons in the Pentagon under President George W. Bush. In any event, the presence of so many self-styled agenda-driven "experts" possessing regular media access raises questions about the objectivity of the policy-making process in Washington. If you seed enough partisans into the system and they are all singing the same tune that is then played and replayed in the media even a whole parcel of lies can eventually seem to be the truth."
Posted by Tony at 6:26 AM