"A well-placed British source informed WMR that Rahm Emanuel's father, Benjamin Emanuel, specialized in the terrorist bombings of buses carrying British troops and policemen during the British Mandate in Palestine.

British MI-6 files contain information on the elder Emanuel's participation in the terrorist activities of Irgun Zvai Leumi, a Jewish terrorist organization that targeted British forces, UN officials, and Palestinian Arabs in the lead up to Israeli independence in 1948.

Benjamin Emanuel, a Jew from Russia whose real name was Ezekiel Auerbach, was arrested by British police for terrorist activities in the months prior to Israeli independence. Many of the British policemen killed by Emanuel and his Irgun colleagues between 1947 and 1948 had been transferred to Palestine upon Indian and Pakistani independence in 1947. Irgun saw the increase of British policemen from the Indian subcontinent as a major threat. 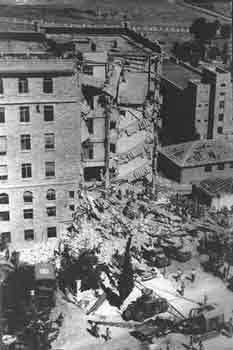 The Jewish terrorist murders of British troops and policemen resulted in massive anti-Jewish riots in London, Liverpool, Glasgow, Manchester, and Cardiff in 1947. In 1946, Emanuel's Irgun bombed the King David Hotel in Jerusalem, killing 91 people, including 28 British soldiers and policemen......"
Posted by Tony at 9:59 AM