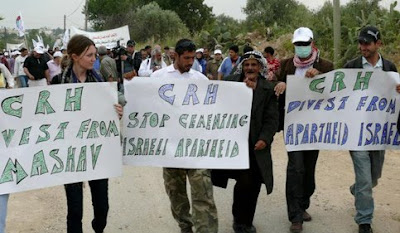 Adri Nieuwhof and John Dorman, The Electronic Intifada, 12 May 2010

Meanwhile, in the occupied West Bank village of Bilin, the weekly demonstration on 30 April focused on CRH's role in the construction of Israel's wall which effectively annexes to Israel's settlements the agricultural land of villages like Bilin. Carrying placards calling on CRH to divest from Mashav, villagers marched to the site where resident and grassroots leader Bassem Abu Rahmah was killed by the Israeli military last year. While filming the 30 April demonstration, Irish national Tommy Donnellan was injured and detained by Israeli soldiers. He was released after two hours...."
Posted by Tony at 10:01 AM