The Cover-up: BP's Crude Politics and the Looming Environmental Mega-Disaster 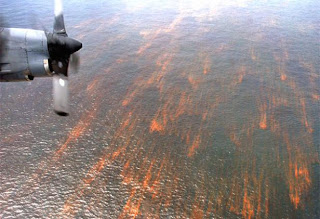 "WMR has been informed by sources in the US Army Corps of Engineers, Federal Emergency Management Agency (FEMA), and Florida Department of Environmental Protection that the Obama White House and British Petroleum (BP), which pumped $71,000 into Barack Obama's 2008 presidential campaign -- more than John McCain or Hillary Clinton--, are covering up the magnitude of the volcanic-level oil disaster in the Gulf of Mexico and working together to limit BP's liability for damage caused by what can be called a "mega-disaster."....."
Posted by Tony at 6:20 AM