A massacre of arabs masked by a state of national amnesia 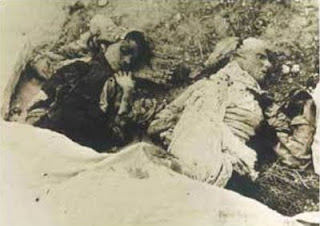 Sixty years on, the true story of the slaughter of Palestinians at Deir Yassin may finally come out

By Catrina Stewart in Jerusalem
The Independent

"....Sixty-two years on, what really happened at Deir Yassin on 9 April remains obscured by lies, exaggerations and contradictions. Now Ha'aretz, a liberal Israeli newspaper, is seeking to crack open the mystery by petitioning Israel's High Court of Justice to release written and photographic evidence buried deep in military archives. Palestinian survivors of Deir Yassin, a village of around 400 inhabitants, claim the Jews committed a wholesale massacre there, spurring Palestinians to flee in the thousands, and undermining the long-held Israeli narrative that they left of their own accord.....

Judges, who have viewed all the archived evidence held by the Israeli state on Deir Yassin, have yet to make a decision on what, if anything, to release. Among the documents believed to be in the state's possession is a damning report written by Meir Pa'il, a Jewish officer who condemned his compatriots for bloodthirsty and shameful conduct on that day. Equally incriminating are the many photographs that survive.

"The photos clearly show there was a massacre," says Daniel McGowan, a US retired professor who works with Deir Yassin Remembered. "Those photos show [villagers] lined up against a quarry wall and shot."......"

Deir Yassin Remembered
Posted by Tony at 3:27 AM