The Danger of Israel's Nuke Hypocrisy 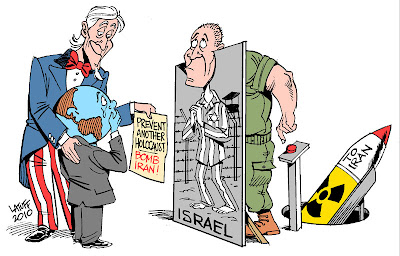 "The United States finds itself in the curious position of going to the mat on behalf of Israel’s top security concern – preventing Iran from obtaining a nuclear bomb – while Israel and its supporters continue to insist that U.S. officials maintain Israel’s decades-old “ambiguity” about whether or not it possesses a nuclear arsenal of its own.

This extraordinary double standard – demanding transparency from Iran, which doesn’t have the bomb and disavows wanting one, and protecting the secrets of Israel, which is believed to have one of the most sophisticated nuclear stockpiles on earth – has forced the Obama administration and many U.S. news organizations into logical and moral contortions....."
Posted by Tony at 6:46 AM

you're a fucking idiot. iran deckares it wants to destroy israel, that's the differance

Israel wants to destroy Iran, and have the US do it - but the very stupid still believe Iran's former President threatened to "wipe Israel off the map" - something he never said, and which was a deliberate mistranslation by MEMRI - a Zionist and racist org.