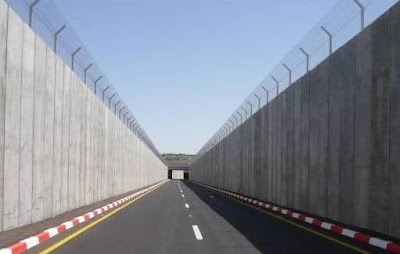 "JERUSALEM // The construction of sections of a controversial segregated road network in the West Bank planned by Israel for Palestinians – leaving the main roads for exclusive use by settlers – is being financed by a US government aid agency, a map prepared by Palestinian researchers has revealed.

USAid, which funds development projects in Palestinian areas, is reported to have helped to build 114km of Israeli-proposed roads, despite a pledge from Washington six years ago that it would not assist in implementing what has been widely described by human rights groups and the Israeli media as Israel’s “apartheid road” plan.

To date the agency has paid for the construction of nearly a quarter of the segregated road network put forward by Israel in 2004, said the Applied Research Institute of Jerusalem (ARIJ).....

Ingrid Jaradat Gassner, the director of Badil, a Bethlehem-based organisation that has lobbied against road segregation in the southern West Bank, said there was considerable domestic and international pressure on the PA to agree to roads dictated by Israel, if only because they often eased the existing restrictions on Palestinian movement.

“Sadly, the PA is helping to build its own Bantustans,” she said. “Palestinian towns and villages connected by back roads and tunnels while the settlers control the main highways is what the US appears to mean when it talks about a viable Palestinian state.”"
Posted by Tony at 2:29 PM