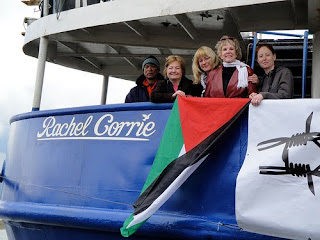 "London – 14 May 2010 – At 22:45 local time tonight, the MV Rachel Corrie, a 1200-ton cargo ship, part of the eight-vessel Freedom Flotilla, set sail from Ireland on its way to the Mediterranean Sea. There, ships from Turkey and Greece will join her, then sail to Gaza.

This past week reports from Israel have indicated that the Israeli authorities will not allow the Freedom Flotilla to reach Gaza with its cargo of much-needed reconstruction material, medical equipment, and school supplies. According to Israeli news sources, clear orders have been issued to prevent the ships from reaching Gaza, even if this necessitates military violence.

The Free Gaza Movement, which has launched eight other sea missions to Gaza, confirms that Israel has tried these kinds of threats and intimidation tactics before in order to try to stop the missions before they start. “They have not deterred us before and will not deter us now,” said one of the organizers....."
Posted by Tony at 8:42 AM