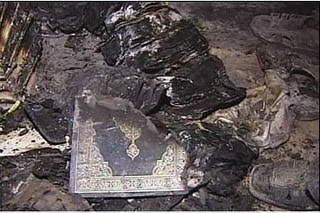 "LUBBAN ASH SHARQIYA, West Bank, May 10, 2010 (IPS) - "There is immense anger as well as a feeling of vulnerability and fear when a place of sanctuary and holiness is subject to indiscriminate violence," says Issa Hussein.

"Despite living under a brutal military occupation and being subjected to regular attacks by Israeli settlers for decades, normally places of worship were spared," Hussein, a spokesman from this Palestinian village, near Nablus, in the northern West Bank, told IPS.

"People could forget about the economic hardship, the political oppression and their personal problems for a few hours a week as they retreated to pray in the mosque."

All this changed dramatically for the agricultural village of 3,000 residents a few weeks ago.

Israeli settlers from one of the three surrounding illegal settlements, which have been built on land belonging to Lubban Ash Shariqiya and other Palestinian villages, carried out an arson attack on the local mosque...."
Posted by Tony at 4:11 AM