The end of the world as we know it? 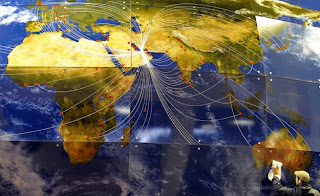 "For the past 500 years or so, world politics has mostly been driven by the actions and priorities of the transatlantic powers (aka "the West"). This era began with the development of European colonial empires, which eventually carved up most of the globe, spread ideas like Christianity, nationalism and democracy, and created many of the state boundaries that still exist today. (They also screwed a lot of things up in the process).........
I don't want to go all Spenglerian on you (or even Kennedy-esque) -- but I'm beginning to think this era is essentially over, and that we are on the cusp of a major shift in the landscape of world power. Asia's share of world GDP already exceeds that of the United States or Europe, and a recent IMF study suggests it will be greater than the United States and Europe combined by 2030. Europe has already become a rather hollow military power, and the current economic crisis is going to force European states-and especially the United Kingdom -- to cut those capabilities even more. Needless to say, hopes that the euro might one day supplant the dollar look rather hollow today. Politics within many European countries is likely to get nasty as austerity kicks in, and there will inevitably be less money and less support for Europe's various philanthropic projects in Africa, Central Asia, or the Middle East. Such activities won't disappear entirely, but it's hard to see how they can continue at anywhere near their current levels.
America's situation is more favorable for several reasons (greater growth potential, a younger and still-growing population, more flexible labor markets, greater capacity to borrow abroad, etc.), but it will face analogous pressures of its own....."
Posted by Tony at 8:28 AM