Israeli religious forces on the march 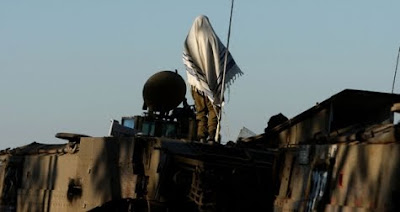 "As the Israeli Palestinian 'peace process' marches in place, religious-Zionism is marching into the leadership of the Israeli army, rendering an improbable peace mission impossible.

If as expected their number continues to increase at the same rate, no future Israeli leader will be able to evacuate Jewish settlements in the context of a peace agreement.

The radicalisation of Israeli society and polity is evident not only in the most right wing government in the country's history, but also in the make up of its professional military....

In 1990, the year before the peace process started between Israel and its neighbours, two per cent of the cadets enrolled in the officers' course for the infantry corps were religious; by 2007, that figure had shot up to 30 per cent....

Lately, there have been reports about tensions between the Israeli military and some of the most violent settlers as the military tries to reign in some of their more extreme provocations.

In general, however, the military has been the settlers' best friend and defender in the occupied territories.

And despite increased settler violence and vandalism against adjacent Palestinian towns and villages, the occupation army has been no less than complicit in the daily harassment of Palestinian residents and farmers....."
Posted by Tony at 10:32 AM