The Nakba and the Two-State Solution 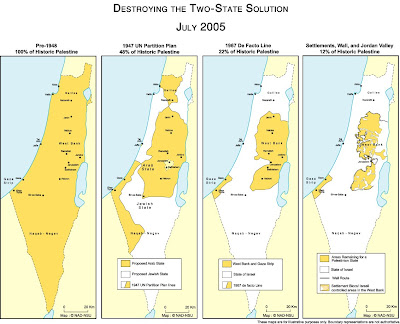 Why Talk of "Realism" is Unrealistic

".....When one listens to the words of a Mahmoud ‘Abbas or a Salim Fayyad, it becomes obvious that it makes no difference who among the “leaders” of the Palestinian Authority (PA) talks. The content is the same, for they are simply delivery mechanisms and not the creators of the message. (The same applies to most other Arab leaders.) Having reached the inevitable terminus of the Peace Process and the Road Map and their interminable negotiations, they are now clutching the straw of the Indirect Proximity Talks. ‘Abbas, desperate to sustain a role for himself, was busy throwing the hot potato to equally ineffectual Arab leaders. The latter, if they do anything at all, they pass on the hot potato to the United Nations or some future conference of the Arab League. In other words, they try to freeze the hot potato to death.

Such “leaders” do not acknowledge that there is no justification for the assumption that a Two State solution is a teleological goal. It has failings that must be examined in light of new forms of reasoning, new events, and new practices. (4) For while, the “vision” of the Two State is “legitimate” in “the international consensus,” legitimacy is in the eye of the beholder. “Whose consensus?” is a legitimate question. What about the point of view of the people who most affected by this consensus?

One need only to look at borders, roads, contiguity, sovereignty dimensions, economic sufficiency, and so forth to realize that the Two State Solution is hardly “realistic.” While the Palestinian Authority is entrenched in political quietism, self-censorship, and obeisance, they nonetheless must confront the effects of that path.....

It is therefore time to re-assess the “realistic” approach. For many years now, the dominant view of Israel in much of the Arab world has reflected an internalization of the myth of Israeli superiority, not morally or ethically, but militarily and economically. Conveniently, it was parroted and propagated by successive different Arab governments in order to rationalize and justify the shirking of their historic responsibility to help Palestinians in achieving self-determination and independence based on the liberation of all usurped land....."
Posted by Tony at 9:40 AM