Silenced for speaking the truth about Guantanamo 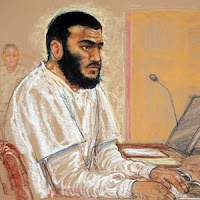 ".....Because the case involves a Canadian citizen – and because the Canadian government is doing sod-all for its passport-carrying prisoner – it hasn't been getting a lot of publicity on this side of the Atlantic. It should.

Omar Khadr was 15 when he allegedly – the word "'allegedly" is going to have to be used for ever, since this is not a fair trial – shot and killed a US Special Forces soldier in eastern Afghanistan in July 2002. Last week, a former US serviceman called Damien Corsetti, nicknamed "The Monster" at the Bagram jailhouse where torture and murder were widespread, agreed via a video link to the Guantanamo "court" that Khadr was trussed up in a cage "in one of the worst places on earth". "We could do basically anything to scare the prisoners," Corsetti announced.

Beating was forbidden, "The Monster" acknowledged, but prisoners could be threatened with "nightmarish scenarios" like rendition to Egypt or Israel where, according to Canada's Globe and Mail, "they would disappear". Which tells you a lot about Israel. Or what the Americans think of Israel. Quite a lot about Egypt, too, come to think of it......."
Posted by Tony at 8:00 AM