Slain Ramallah Youth; Shot By A Settler, Left To Die 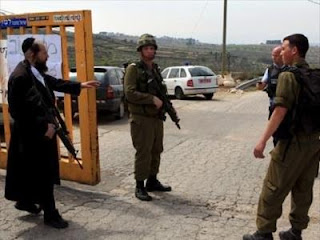 "Palestinian medical sources reported that Aysar al-Zaben, 16, who was killed on Friday, was shot by Israeli settlers in Wad Al Haramiyya area near the central West Bank city of Ramallah, apparently bled to death as a bullet struck him in the heart.
Al Zaben, from Al Ma'sara Al Sharqiyya village, was shot and by a Jewish settler and was left to die.

Palestinian medics who were informed of the shooting by local residents searched the area and located his body three hours after he was wounded.

After the body of al-Zaben was located and autopsy revealed he was shot by one live round [Shoot-to-kill policy!]....."
Posted by Tony at 3:17 PM