Is There Hope for a Two-State Solution? 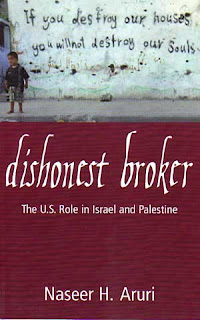 Obama and the Middle East

By NASEER ARURI
(Chancellor Professor (Emeritus) at the University of Massachusetts Dartmouth. He is the author of Dishonest Broker, published by South End Press, Cambridge, MA.)
CounterPunch

"Perhaps it is more appropriate to begin with the question of whether a two-state settlement has ever been possible and/or viable at anytime at all since 1948. This essay begins by delineating the salient factors which dealt a severe blow to the two-state solution. The long diplomatic paralysis and the impediments to a two-state solution, are embedded in the “peace process” itself, and in the ongoing Zionist consensus that pre-1948 Palestine from the River Jordan to he Mediterranean Sea should be a single state under exclusive Israeli sovereignty. In fact, the real function of the “peace process” has been to Shelter Israel from the threat of peace. The peace process is a misnomer that has enabled Israel to escape its obligations to the Palestinian people under international law. Instead, such obligations have been effectively replaced by Israeli decrees presented as American peace initiatives......"
Posted by Tony at 11:24 AM