Arabs have a complex relationship with the Holocaust 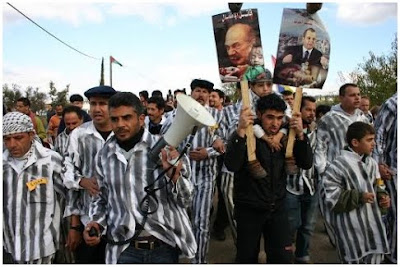 ( Gilbert Achcar's book, The Arabs and the Holocaust, is published this month by Saqi.)

"......Most stunning of all, on 9 January 2009, at the peak of the brutal Israeli onslaught on Gaza, inhabitants of Bi'lin, another West Bank village known for standing at the forefront of the struggle against the Israeli occupation, organised a demonstration in protest, wearing striped pyjamas similar to those of Nazi concentration camp inmates. An account by the Bil'in Popular Committee states: "Protesters also wore small yellow cutouts in the shape of Gaza with the word 'Gazan' written on them to symbolise the yellow 'Jude' stars of David worn by European Jews during World War II." The BBC briefly broadcast a glance at this astounding event: a video is still available. That the message the Palestinian demonstrators conveyed was "exaggerated" is obvious (and natural); but the point is that they were identifying with the Jewish victims of Nazism and regarding the Holocaust as the highest standard of horror, rather than denying it........"
Posted by Tony at 3:50 AM