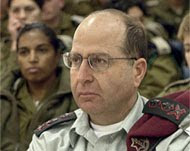 "Israel is primed for a war on Iran, a deputy to Prime Minister Benjamin Netanyahu said Monday, in a rare break with his government's reticence as world powers try to talk Tehran into curbing its nuclear plans.

By spearheading assaults on guerrillas in neighboring Lebanon and Palestinian territories, the Israeli air force had gained the techniques necessary for any future strikes on Iranian sites, Deputy Prime Minister Moshe Yaalon said..... "
Posted by Tony at 11:26 AM