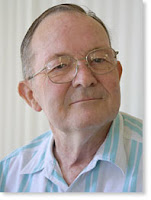 by Chalmers Johnson and Tom Engelhardt

"They came in as unreformed Cold Warriors, only lacking a cold war – and looking for an enemy: a Russia to roll back even further, rogue states like Saddam's rickety dictatorship to smash. They were still in the old fight, eager to make sure that the "Evil Empire," already long down for the count, would remain prostrate forever; eager to ensure that any new evil empire like, say, China's would never be able to stand tall enough to be a challenge......

Chalmers Johnson was himself once a Cold Warrior. Unlike the top officials of the Bush administration, however, he retained a remarkably flexible mind. He also had a striking ability to see the world as it actually was – and a prescient vision of what was to come. He wrote the near-prophetic and now-classic book, Blowback, published well before the attacks of 9/11, and then followed it up with an anatomy of the U.S. military's empire of bases, The Sorrows of Empire, and finally, to end his Blowback Trilogy, a vivid recipe for American catastrophe, Nemesis: The Fall of the American Republic. All three are simply indispensable volumes in any reasonable post-9/11 library. Here is his latest consideration of that disastrous moment and its consequences......"

".....There is, I believe, only one solution to the crisis we face. The American people must make the decision to dismantle both the empire that has been created in their name and the huge, still growing military establishment that undergirds it. It is a task at least comparable to that undertaken by the British government when, after World War II, it liquidated the British Empire. By doing so, Britain avoided the fate of the Roman Republic – becoming a domestic tyranny and losing its democracy, as would have been required if it had continued to try to dominate much of the world by force. To take up these subjects, however, moves the discussion into largely unexplored territory. For now, Holmes has done a wonderful job of clearing the underbrush and preparing the way for the public to address this more or less taboo subject. "
Posted by Tony at 5:32 AM