Does "Loving" Lebanon Mean Never Having to Say You're Sorry? 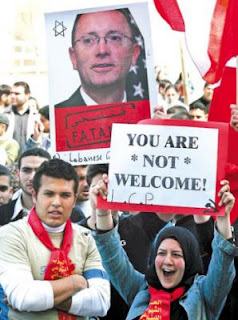 "......Following a total of nearly seven years service in Israel, at both the US Embassy and the US Consulate, Foreign Service Officer Feltman was sworn in as US Ambassador to Lebanon on July 22, 2004, with the help of former US Ambassador to Israel Martin Indyk's an ardent Zionist and current Washington DC based activist for AIPAC and an Arab/Muslim bashing mouthpiece for the Israel Lobby. Feltman acquired Indyk's support to be Israel's man in Lebanon during the year (2000-2001) they worked together in Israel. Feltman was Ambassador Indyk's Special Assistant.

But, no sooner had Feltman arrived in Beirut than he was handed a thick file which included nearly a dozen unfinished projects. They were not just your everday, easy make work projects and he has failed at every one of them.

According to a Staffer at the Lebanon Desk at the State Department (202-644-4000) who was not authorized to speak publicly on this subject: "State expected Feltman to advance at least some of this shit!" indicating a list fairly well known to Foggy Bottom denizens. Some of the items:

--Sharply reduce, with the eventual objective of elimination, Syrian and Iranian influence in Lebanese politics and help identify their 'assets'.

--Conduct and coordinate with visiting US officials, on site visits and undertake discussions with Tripoli/Bignin/Akkar Sunni groups with respect to a possible joint US-Lebanese Airbase at Kleit

-- Investigate and analyze the possibility of Lebanon being divided into Autonomous Regions a la Iraq .

--Bolster the acceptance and popular standing in Lebanon of the Maronite Lebanese Forces and the Druze Socialist Party led by Samir Geagea and Walid Jumblatt respectively ( Meanwhile, Feltman's bosses in Washington were telling Walid Jumblatt this week that he can count on US military help for the ' autonomous zone' he dreams about to combat Hezbollah and the Lebanese Resistance)

In the final analysis, Jeffrey Feltman's work record, including his nearly 7 years in Israel and 40 months in Lebanon suggests that Israel arranged for Feltman to be posted to Lebanon to do Israel's work.

In that task he succeeded, but many of the nearly 50,000 US citizens in Lebanon think we Americans can do better next time by bringing in an envoy that will put American and Lebanese interests before Israel's."
Posted by Tony at 8:42 AM