The "Brave" Lebanese Army: "Everything they couldn't take they destroyed" 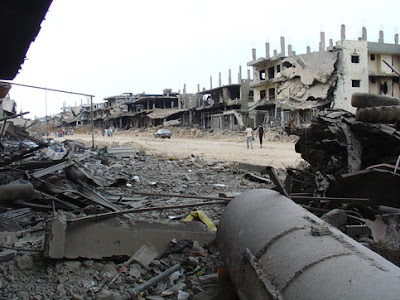 "......The middle-aged video-maker and editor asks, "the battle never reached this far, so why did they burn my house?" The area where Khaled lives was claimed by the Lebanese army during the first days of its fighting that would last for fifteen weeks against the militant group Fatah al-Islam that had established itself in the camp. During the siege Khaled photographed from the nearby highway Lebanese soldiers occupying his home and saw that there was no damage sustained to the house. The day the battle between the army and Fatah al-Islam officially ended, the victorious Lebanese army paraded down the highway, greeted by Lebanese citizens from the nearby villages, many of which lost their soldier sons during the siege. From the highway, Khaled saw soldiers doing something to his house, though he couldn't tell exactly what, while the crowd was cheering them on.

When he returned to his house a week and a half ago, Khaled found that it had been completely looted, including the appliances in the kitchen, which was destroyed by shelling. Additionally, fuel had been thrown onto the remaining walls and everything flammable in the house was put in the center of the rooms and burned. The iron front door had been blasted open and all of Khaled's furniture, his television and appliances, bed furnishings, and even the olive oil, were stolen from the house.

However, what he did find were a dozen washing machines and a dozen fridges, all of them taken from his neighbors' houses. Because of his home's close proximity to the highway, he reckons that it was a strategic place for the looting army, or whomever they let in to do the stealing, to take their bounty from the camp. "Import/export from Nahr al-Bared to China and Indonesia," Khaled jokes. Also indicating the systematic nature of the looting, a neighbor found 25 televisions being stored in his house. The appliances were eventually matched with their owners, though Khaled is currently making use of an unclaimed washing machine until its owner comes to collect it.....

As Palestinians rehabilitate what remains of their homes and start over again, their laundry hanging on clotheslines a symbol of perseverance as meaningful as any flag, the evidence that might prompt an investigation will be cleaned up as well. Fearful that the wanton destruction of the camp is just another page of the Palestinian refugees' history of constant vulnerability and displacement -- hundreds of Nahr al-Bared's residents were already displaced from the previously destroyed camps in Lebanon -- they express their wish to preserve their homes, community, and national cause. At the clinic one of the older men declares, "Despite all of this ... we will continue to stay here and resist and remain steadfast ... We will rebuild the camp, even if it's with our own hands.""
Posted by Tony at 6:30 AM