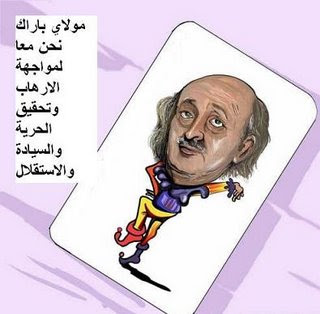 "BEIRUT, Lebanon: A senior Lebanese pro-government leader called on the United States on Sunday to impose sanctions against Syria, warning that Lebanon would not enjoy stability and independence as long as Syrian President Bashar Assad's regime was in power.

Walid Jumblatt also accused Hezbollah, the Lebanese militant group allied with Syria and Iran, of involvement in political assassinations in Lebanon along with its Syrian allies.

Jumblatt visited New York and Washington in recent days and has been urging the U.S. to help Lebanon elect a president before Emile Lahoud's term ends Nov. 24.

Jumblatt's accusations against Syria for the assassination of former Prime Minister Rafik Hariri in 2005 and a string of political killings since then are not new, but leveling the blame against Hezbollah ups the ante between the anti-Syrian leader and the guerrilla group......"
Posted by Tony at 5:01 AM