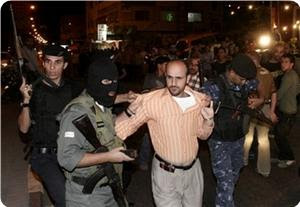 "GAZA, (PIC)-- Hamas Movement has strongly condemned Tuesday PA security forces loyal to PA chief Mahmoud Abbas for savagely quelling a peaceful rally held in Al-Khalil city in support of beleaguered Palestinian prisoners in the Israeli Negev prison. The Movement also described the harsh dispersal of the sit-in as "shame on the PA security forces, and clear betrayal to the Palestinian prisoners". "It is indeed a big shame on Abbas's security forces to use live bullets in dispersing peaceful rally called for by Hamas Movement in Al-Khalil city in solidarity with the Palestinian captives in the Negev jail", affirmed Fawzi Barhoum, the spokesman of Hamas in Gaza Strip.....

At least one captive was killed and more 250 others were wounded after IOF troops stormed their jail tents, using live and rubber-coated bullets and teargas canisters against them, Palestinian legal sources and concerned agencies confirmed.

Eight of the wounded Palestinians were reportedly in critical condition, they added.

"We take this matter (quelling of the protest by PA security) seriously as we emphasize that massive demonstrations across occupied Palestine must be organized in support of our heroic captives in Israeli jails", Barhoum added......

Moreover, Hamas Movement called on PA security officers not to "betray" their own people, warning that such crimes would only serve to gain their perpetrators a place in black records of Palestinian history.

For his part, the jailed political leader of Hamas MP Emad Nofal deprecated the IOF troops' aggression on the captives as well as the "unwarranted" suppression of the protesters in Al-Khalil city at the hands of Abbas's security forces.

"What is the difference between the IOF troops that quelled Palestinian captives, and Abbas's security forces that quelled supporters of those captives?" Nofal remarked in a message leaked from the Israeli Maggiddo prison where the legislator is detained.

He called for "institutional and popular Palestinian uprising in support of the prisoners". The lawmaker also affirmed that the IOF troops hadn’t relaxed their suppressive practices against the Palestinian captives, including the latest crime in the Negev prison among other IOF crimes, even for a single day. "
Posted by Tony at 7:28 PM