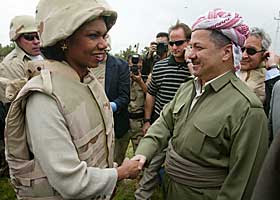 "The U.S.'s current cheerleader for American imperial arrogance, Secretary of State Condoleezza Rice, has now stated that Iran presents a major obstacle blocking the U.S.'s vision for the Middle East. In her fairy-tale world, this vision is of a region where the countries "trade more, invest more, talk more and work more constructively to solve problems."

Where, one wonders, does all this leave the U.S., Iran and the world? Certainly it is not in a safer place than it was prior to Ms. Rice's peculiar visionary pronouncements. As the U.S. struggles to keep a resurgent Taliban from regaining total control in Afghanistan, and tries to subdue the Iraqi people sufficiently to grab that country's oil, another war on a new front does not seem like a reasonable course of action. But Mr. Bush and his neocon yes-men advisors do not seemed concerned with the facts as they have lived them these past four years. Rather, they prefer their pie-in-the-sky visions of the Middle East being overrun by U.S. soldiers and emerging a short time later as a model of peace and democracy. That Congress does not seem willing to prevent this colossal error is terrifying for much of the world. For the people living in the Middle East, the fear must be entirely overwhelming. And one cannot blame them if that fear turns to an anger that will threaten the world, much as Mr. Bush has threatened it."
Posted by Tony at 8:08 AM