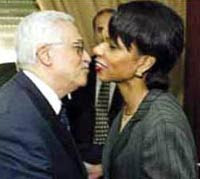 Israel denies Abbas claim it has been holding talks with Hamas

"Palestinian Authority Chairman Mahmoud Abbas said on Thursday officials from the Islamist group Hamas were holding meetings with Israel to end the blockade of Gaza and ease access for goods and people.

Israel denied the meetings had taken place, saying there was a policy of
avoiding contact with Hamas.

Asked by Al-Arabiya television if he was aware of such meetings, Abbas
said: "There are meetings taking place between Hamas and Israel, there were meetings held on Erez (crossing point) and there are ongoing meetings in other places."....."
Posted by Tony at 7:46 AM