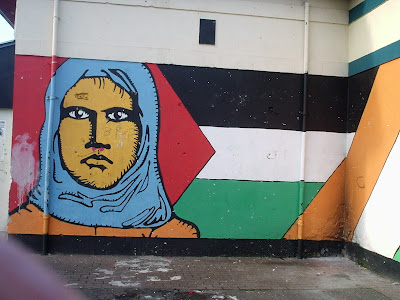 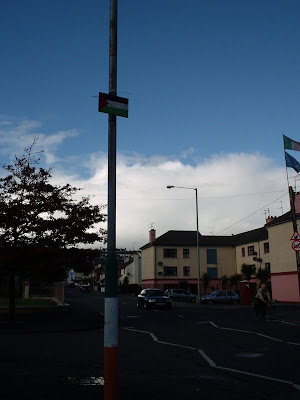 "During my recent trip back to Ireland, I spent a day up north in Derry - I'm sure you've heard of it from the Civil Rights struggle and the events of Bloody Sunday.

Anyway, while walking around the Bogside - famous for being the scene of Bloody Sunday and for its murals http://www.bogsideartists.com/ I noticed a lot of Palestinian flags and messages of support for Hamas (odd in a sense, being as the various Irish republican movements were invariably left-wing and secular, but I suppose not so odd in another sense). I also came across the large mural I've attached - unfortunately my poor photography skills left out the large Irish flag to the right. It struck me as ironic that you can so easily find public symbols of sympathy for Palestine in Ireland, separated by thousands of miles and linguistic/religious/ethnic differences, but you will struggle to find one here in Saudi Arabia, or just about anywhere else in the Arab world, for that matter.

Then again, I suppose it's not all that ironic when you think about it..."
Posted by Tony at 9:28 AM