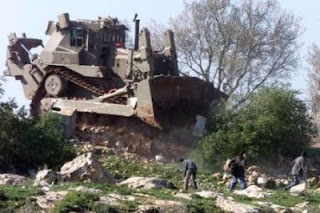 "Rachel Corrie was killed by Israeli forces over four years ago while working in Gaza as a peaceworker with the International Solidarity Movement. Her family filed a lawsuit in US court against the American company which built the Caterpillar-brand bulldozer that killed Corrie, but that lawsuit has now been dismissed by a Judge in the US Court of Appeals.

The parents of Rachel Corrie, along with a number of Palestinian plaintiffs who each have a family member killed by a Caterpillar-brand bulldozer, have filed a motion for re-hearing. If the court refuses to re-hear the case, the plaintiffs will go to the Supreme Court......"
Posted by Tony at 7:26 AM