Israel Determined to Bring on Armageddon! 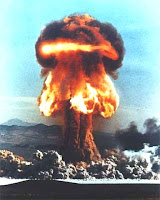 "This is the message prime minister Ehud Olmert is carrying urgently to French President Nicolas Sarkozy Monday and British premier Gordon Brown Tuesday, according to DEBKAfile’s military and intelligence sources.

Last week, Olmert placed the Israeli intelligence warning of an Iranian nuclear breakthrough before Russian president Vladimir Putin, while Israel’s defense minister Ehud Barak presented the updated intelligence on the advances Iran has made towards its goal of a nuclear weapon to American officials in Washington, including President Bush.

Olmert will be telling Sarkozy and Brown that the moment for diplomacy or even tough sanctions has passed. Iran can only be stopped now from going all the way to its goal by direct, military action.

Information of the Iranian breakthrough prompted the latest spate of hard-hitting US statements. Sunday, Oct. 21, US vice president Cheney said: "Our country, and the entire international community, cannot stand by as a terror-supporting state fulfills its grandest ambitions.''

Friday, the incoming Chairman of the Joint Chiefs of Staff, Adm. Michael Mullen said US forces are capable of operations against Iran’s nuclear facilities or other targets. At his first news conference, he said: “I don’t think we’re stretched in that regard.”

It is worth noting that whereas Olmert’s visits are officially tagged as part of Israel’s campaign for harsher sanctions against Iran, his trips are devoted to preaching to the converted, leaders who advocate tough measures including a military option; he has avoided government heads who need persuading, like German Chancellor Angela Merkel or Italian prime minister Romano Prodi........"
Posted by Tony at 7:43 PM