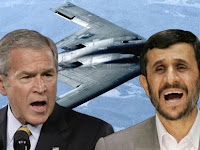 "Tucked inside the White House's $196 billion emergency funding request for the wars in Iraq and Afghanistan is an item that has some people wondering whether the administration is preparing for military action against Iran.

The item: $88 million to modify B-2 stealth bombers so they can carry a newly developed 30,000-pound bomb called the massive ordnance penetrator, or, in military-speak, the MOP.

The MOP is the the military's largest conventional bomb, a super "bunker-buster" capable of destroying hardened targets deep underground. The one-line explanation for the request said it is in response to "an urgent operational need from theater commanders."

What urgent need? The Pentagon referred questions on this to Central Command.

ABC News called CENTCOM to ask what the "urgent operational need" is. CENTCOM spokesman Maj. Todd White said he would look into it, but, so far, no answer......"
Posted by Tony at 7:37 PM