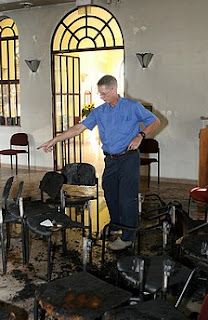 The interior of the church was badly damaged and religious artifacts including crucifixes and bibles were burned.

The police said they suspected that arsonists threw flammable substance inside the church at night.

The church is located not far from a Haredi (Jewish Orthodox) neighborhood and police suspect that extremist Haredis offended by the presence of the church in the area may have carried out the arson attack.

Haredi and other Orthodox Jews despise the Christian religion for theological and historical reasons. In Jewish religious literature Jesus is called “Hukum” a derogatory name, and the New Testament is considered the “worst book under the sun.”

Last month, the High Rabinnate of Israel urged Jews not to have close affinity with Christians, arguing that all the Christians, including so-called Christian Zionists, wanted was to convert Jews to Christianity.

Israel doesn’t allow proselytizing, but thousands of Jews have converted to evangelical Christianity, which teaches that the creation of Israel in Palestine in 1948 was a fulfillment of Biblical prophecy and a precedent to the second advent of Jesus.

Evangelicals are also against peace between Israel and the Palestinians, especially if it involves Israeli withdrawal from occupied Palestinian territories."
Posted by Tony at 7:56 AM