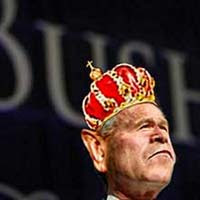 ".....In the aftermath of “Operation Iraqi Freedom”, and the “shock and awe” which went with it, Tel Aviv has expanded its nuclear weapons delivery options in the form of more advanced German U-boats, supposedly to confront the Iranian nuclear weapons threat, equally non-existent as that of Iraq. In the meantime, Washington has destroyed the nation of Iraq, by a non-stop campaign of ruination via sanctions and war commencing in 1990. Such is the background to the confrontation with Iran, the next target on the radar screen of the Tel Aviv-Washington axis.....

....Cheney and Bush remain on stage, apparently unfazed, and AIPAC still has a hammer-lock on the U.S. Congress when it comes to Middle East policy. Ultimately, everything is determined by what Tel Aviv wants, or does not want, to happen. It does not matter what you think or want. What matters is how far America’s elected officials are prepared to go under the spell of special interests. To date, there have been no limits......

One wonders what the White House is waiting for. From either conviction or intimidation, French President Sarkozy and German Chancellor Merkel are on board, ready to support the Tel Aviv-Washington axis in its endeavors, no matter how crackbrained and reckless. Whitehall is of the same mind, the retirement of Tony Blair notwithstanding. So the EU is in the bag. Capitol Hill, taking its cue from AIPAC, plus all the front-running presidential contenders of both parties, who take the same cue, have stated unequivocally that the option for the United States to bomb Iran is on the table until and unless Tehran stops enriching uranium. The blank check for war has been signed, sealed and delivered......."
Posted by Tony at 7:08 AM