“Come and see our overflowing morgues" 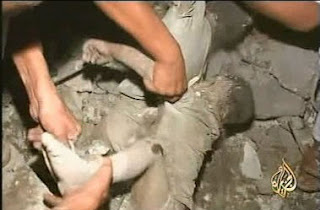 "Come and see the rubble of your surgical air-strikes”

"Retired Lt. Gen Ricardo Sanchez set off a firestorm recently when he described the occupation of Iraq as “a nightmare with no end in sight”. He added that US civilian leadership was “incompetent” and “corrupt” and that the best the US could hope for, given the present circumstances, would be to “stave off defeat.”

Naturally, Sanchez’s remarks were applauded by liberals and progressives who oppose the war, but their enthusiasm is unfounded. Sanchez is neither against the war nor for withdrawal. He simply doesn’t like losing---and the United States is losing....."
Posted by Tony at 8:38 AM