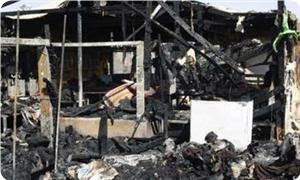 "Israel violates the international convention on the treatment of prisoners of war. Mohammed Safi Muhammed Al-Ashkar, a Palestinian prisoner of age 29, was murdered today morning at 2 AM by an Israeli jailer, who shot him with dumdum bullets at the “Ansar 3/ Nafha” concentration camp south of Al-Nakab, also known as Ketziot. International laws forbid using dumdum ammunitions, which explode inside the victims bodies. Over 400 IDF soldiers from the Shimshon and Metsada special forces raided eight departments of Palestinian prisoners at Al-Nakab in a savage way, shooting live bullets, destroying and burning the prisoners property.

.....300 prisoners were injured, and 18 tents were burned by the IDF during the shooting. The IDF forces cuffed 1700 prisoners with wires, then they started beating them with batons. They refused to transfer all the injured to hospitals for medical treatment.....

.....The prisoners interned at Al-Nakab and other concentration camps in the Israeli Gulag are not criminals, but “sentenced” to hefty imprisonment terms because of their place in society, activities like participating in communal politics, organizing neighbourhood committees, teaching children, which are a hindrance to the Israeli policy of genocide against Palestinians. About half of the elected members of the Palestinian Parliament are interned in the Israeli Gulag, as well as ministers, doctors, lawyers, teachers, engineers, university professors, intellectuals, religious leaders, farmers, public servants, intellectuals, children, women, elderly persons ......

How much longer will the world continue to let Israel get away with their massive crimes ? How much longer will the world allow Israel to extort silence before their crimes ? Please contact the authorities or politicians of your country and explain to them that there are many good grounds for your country to break off relations with Israel, and to place all goods and services from Israel under embargo."
Posted by Tony at 8:13 PM