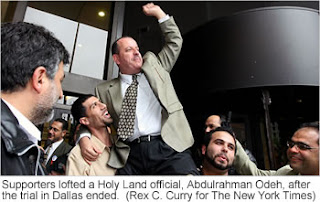 "MIAMI, Oct. 22 -- The trial against what was once the nation's largest Islamic charity ended in a mistrial Monday as federal prosecutors in Dallas were unable to gain a conviction on charges that the group's leaders had funneled millions of dollars to Mideast terrorists.

The jurors in the high-profile case acquitted Mohammad el-Mezain, the former chairman of the Holy Land Foundation for Relief and Development, on virtually all the charges brought against him and deadlocked on the other charges that had been lodged against four other former leaders of the charity.

Monday's developments were a setback for the Bush administration, which had frozen the group's finances three months after the Sept. 11, 2001, terrorist attacks and indicted its officials three years later on charges that they provided funds in support of Hamas......"
Posted by Tony at 5:42 AM