Is it a peace process or dangling of a carrot? 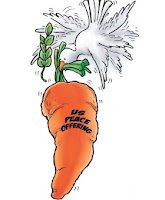 ".....So what's this all about? There are some who believe it's nothing more than a sham to enhance George W. Bush's legacy, shredded by the Iraq war. Others suggest it's a way to boost the standing of Ehud Olmert and Mahmoud Abbas with their respective publics. Maybe so, but in light of the way the so-called Roadmap popped up just before the invasion of Iraq and disappeared just as suddenly there may be something far more sinister at play......

Call me a cynic, but this new US gesture is somehow linked to its intentions towards Iran just as the Roadmap was a precursor to the invasion of Iraq. I hope for the sake of Palestinians and all of us who live in the neighbourhood that this time I'm wrong.
"
Posted by Tony at 6:36 AM