'I Don't Think This Place Is Worth Another Soldier's Life' 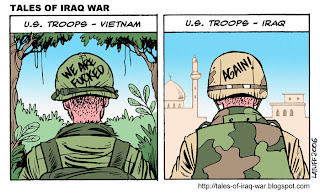 After 14 months in a Baghdad district torn by mounting sectarian violence, members of one U.S. unit are tired, bitter and skeptical

".....Asked if the American endeavor here was worth their sacrifice -- 20 soldiers from the battalion have been killed in Baghdad -- Alarcon said no: "I don't think this place is worth another soldier's life."

While top U.S. commanders say the statistics of violence have registered a steep drop in Baghdad and elsewhere, the soldiers' experience in Sadiyah shows that numbers alone do not describe the sense of aborted normalcy -- the fear, the disrupted lives -- that still hangs over the city......

"The closer we get to leaving, the more we worry about it," said Alarcon, 27, sitting at a plastic table with several other soldiers outside their outpost in Sadiyah. "Being here, you know that any second, any time of the day, your life could be over."

"We had two mechanics working in the motor pool get hit by mortars," Alarcon said. "You would have never thought." Both died.

Many of the soldiers from the battalion are on their second tour in Iraq. Three years ago, they were based in Tikrit, the home of Saddam Hussein, a city they entered expecting to fight a determined Sunni insurgency. By the end of their tour, with much of the violence contained, many of them felt optimistic about progress in Iraq.

"I honestly thought we were making a difference in Tikrit. Then we come back to a hellhole," Marino said. "That was a playground compared to Baghdad."

"They just know back there what the higher-ups here tell them. But the higher-ups don't go anywhere, and actually they only go to the safe places, places with a little bit of gunfire," he said. "They don't ever [expletive] see what we see on the ground.""
Posted by Tony at 9:08 AM