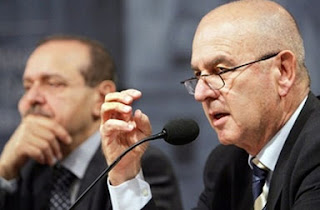 Israel says planing to separate itself completely from Palestinian territory in long term.

"TEL AVIV - Israel plans to paralyse the infrastructure of the Gaza Strip in every possible way and separate itself completely from the Palestinian territory in the long term, a minister said on Saturday.

"We want to separate ourselves from the Gaza Strip at the level of its infrastructure in every way possible," Deputy Defence Minister Matan Vilnai told Israeli public radio.

On Thursday Defence Minister Ehud Barak announced that Israel would start periodic electricity cuts and limit fuel deliveries to the Strip because of the continued firing of rockets by militants.

But Vilnai said these measures were not really because of the rocket firing "but really to achieve the separation of this territory, which was approved in principle two weeks ago by the Israeli government, and whose application had only been delayed for a simple legalistic check."

In September, the security cabinet decreed the Gaza Strip "a hostile entity." It has been controlled completely by Hamas since mid-June when the democratically elected movement ousted security forces loyal to Palestinian president Mahmud Abbas and the Fatah party.

"Long term we want to separate ourselves from this territory, 100 percent," said Vilnai.

Since the Hamas takeover the Israelis have imposed a tight vice around the Gaza Strip, closing crossing points and only allowing through essential products.

Palestinians and human rights groups charge that the noose around the Strip amounts to collective punishment of civilians, contrary to international law.

The sanctions, the first of their kind since the Palestinian intifada or uprising began in late September 2000, can now proceed without further authorisation from the Israeli government.

Since the uprising started, a total of 5,906 people -- the vast majority of them Palestinians -- have been killed."

"I'd bet it is the zionist-palestinian Yasser Abed Rabbo the one who appears in the photo sitting together with the zio-zio minister declaring Israel plans to 'isolate Gaza 100 percent'. It wouldn't surprise me at all if the idea even came from him.

This Abed Rabbo, a turncoat, a long time collaborator and a traitor, currently advisor to Abbas, is one of the most sinister characters existing in the Fatah/PLO and in the palestinian affairs." --- Lucia
Posted by Tony at 10:07 AM