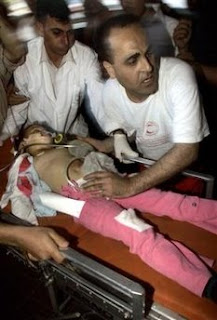 "JERUSALEM, 25 October 2007 (IRIN) - Dozens of patients in the Gaza Strip are unable to receive medical treatment, in some cases life-saving procedures, due to the continued border closures with Israel and Egypt, health officials and international aid workers said.

The Gaza medical system is unable to offer many services, including MRI diagnostics, radiotherapy, cancer treatment and major heart surgeries, especially for children. The border restrictions have also led to the closure of nearly all factories in Gaza and an increasing shortage of basic food supplies, the UN and local advocacy groups said.

"The economic noose continues to tighten around the necks of the people of Gaza, who are being manifestly punished as part of a political strategy," said UN Under-Secretary-General for Humanitarian Affairs John Holmes....."
Posted by Tony at 8:05 AM