What Happened in Nahr Al Bared? 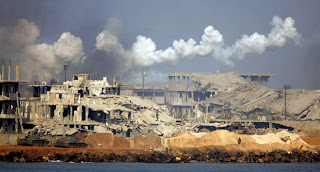 A Palestinian Camp in Lebanon is Burned and Destroyed, the Media is Banned, and the World is Silent

By MICHAEL BIRMINGHAM
(an Irish peace activist who has been mostly based in Lebanon since July 2006. He has formerly worked on human rights and social justice in Ireland and Iraq)

"Nahr Al Bared is a Palestinian refugee camp in the north of Lebanon which has been home to about 40,000 Palestinian people, most of whom are the children and grandchildren of those who left Palestine in 1948. Some like Abu Mohammad were born in Palestine. He was ten years old, and next year it will be sixty years since the formation of the State of Israel was achieved through the ethnic cleansing of Abu Mohammad and so many others from their home in Palestine.....

Between May and September of this year, a ferocious battle took place between the Lebanese Army and a small armed group known as Fatah Al Islam. From the first the day, the Lebanese Army surrounded the camp and fired in artillery, maintaining this course for months. Most of the residents of the camp were forced to leave with the clothes on their backs within the first three days. As the number of young Lebanese soldiers killed and horribly maimed rose through the battle, Lebanon became awash with patriotism and grief, any questioning of the army taboo.....

The United States Government played a key role in this battle, strongly supporting politically and with munitions the Lebanese government's decision to seek a military solution. The Lebanese offered to Fatah Al Islam simply to surrender or die. The European Union and many Arab countries also clearly supported this approach. The moral and legal imperative to distinguish between combatants and civilians, and not to target civilian communities was not a concern. The Palestinians of Lebanon, the subject of so many crocodile tears from around the world during infamous massacres in the past, once again are without support at the moment when it might actually matter.

What happened in Nahr al Bared? Why does the world not seem to care?"
Posted by Tony at 10:23 AM