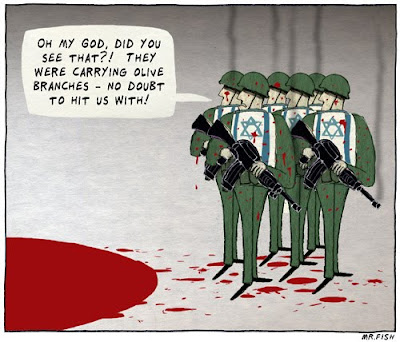 "RAMALLAH, Jun 7, 2010 (IPS) - Although Israel successfully controlled news of its deadly commando raid on the Free Gaza (FG) flotilla during the first crucial 48 hours of media coverage, emerging evidence from witnesses and survivors is challenging the Israeli government's version of events.

These include claims of medical treatment being withheld; beatings and abuse of passengers who never resisted; the Israel Defence Forces (IDF) doctoring audio and selectively editing videos.

Furthermore, allegations of a possible shoot-to-kill policy, amidst autopsies revealing repeated gun shots to the heads of the victims, are also part of an emerging pattern....

This IPS correspondent was physically threatened and verbally abused by Israeli police when she witnessed, and took pictures of, several frightened and cuffed activists being frog-marched away from the airport’s departure lounge.

Paul Larudee, a 64-year-old activist from the U.S. and a diabetic, had to be hospitalised after he was beaten repeatedly on different occasions by the navy seals. Kenneth O’Keefe, an Irish-American and former marine, was hospitalised in Tel Aviv after he too was beaten by security officials at the airport.

O’Keefe wanted to fight his deportation but was advised by his lawyer to leave the country for his own safety."
Posted by Tony at 7:00 AM