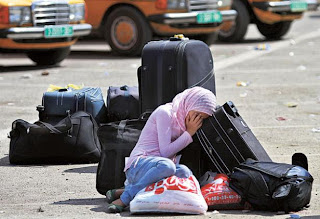 "....They had waited in vain throughout the previous day to be among hundreds who have crossed over on each of the nine days since Egypt announced it was opening the border.

Ms Puhisi, a government zoologist from Deir el Balah, was anxious to take her mother, who has painfully swollen legs and wrists, to the Egyptian doctor who had treated her successfully when times were easier.....

Although Egypt opened the crossing in the wake of the lethal Israeli commando raid on a pro-Palestinian flotilla last week, apparently to escape some of the blame for the closure, it has restricted passage mainly to students with visas to study abroad, serious medical cases, and those with foreign residency or passports.

One of Gaza's leading paediatricians, Dr Adnan al Wahaidi, who has an international reputation, planned to escort his Egyptian wife and their two daughters to see his ailing and elderly mother-in-law in Cairo, but was obliged by two bad-tempered uniformed security guards to wait in the heat with scores of other hopefuls outside the terminal's gates for three hours.......
But a more serious charge was levelled by one family at middlemen in Egypt and their agents. Rihan Talal, 21, a student desperate to get back to Southern Illinois state university, said he and his uncle had refused an offer from someone who said he could get an entry permit from Egypt for between $2,000 and $3,000. "I am paying enough for my education already," he said.

Asked about this, Ghazi Hamad, the senior Hamas civilian overseeing the crossings, said: "I have no comment. You should ask the Egyptians."

He added that Hamas officials would not take "one shekel" from would-be travellers. "It is against our morality, our ethics."

Mr Hamad said he was sorry that travel was still restricted......"
Posted by Tony at 7:34 AM