New face of power in the Middle East 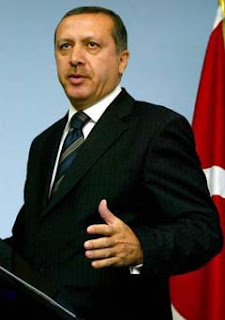 Turkish Prime Minister Recep Tayyip Erdogan's handling of the Gaza crisis has brought him into the spotlight – and his country into the centre of regional politics.

"Ever since Israeli commandos stormed a ship carrying aid to Gaza killing nine activists, the face of Turkish Prime Minister Recep Tayyip Erdogan – the man who led denunciations of the raid – has been prominent on front pages and television screens across the Middle East.

The bloody fiasco has led to a crucial change in the balance of power in the Middle East, greater than anything seen in the region since the collapse of the Soviet Union deprived the Arabs of their most powerful ally....."

Advice to Erdogan and to Turkey: Don't Trust the Arab Throngs!

They are the same "masses" which cheered for the former Soviet Union; they have no convictions or real understanding of their interests or of history. They are like lost sheep, looking for an easy way out; Erdogan is the shepherd of the moment. Tomorrow? Who knows....

These are the same gullible throngs that cheered for Lawrence of Arabia 100 years ago and fought the Ottomans. Why? Because the British Colonialists promised them independence. Can you believe that!

Fast forward and you find the same "masses" cheering for Obama in Cairo. Why? Because he promised a "Palestinian State!" Has anything changed?

Hell, most Arab countries (including Syria) conspired with the Empire to destroy Iraq! The Syrian air force proudly joined the USAF in bombing Iraqi forces in Kuwait!

As the Turks say, the Arabs are traitors, even to their own causes.

I will change my mind when I see evidence to the contrary.
Posted by Tony at 4:46 AM