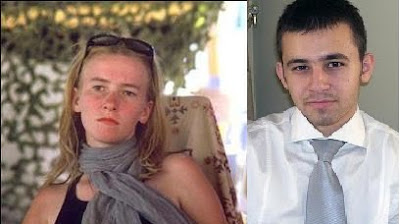 "....In the past seven years, two Americans were unjustly, maliciously and violently killed by the Israel “Defense” Forces (IDF). Both had unwittingly given their lives for Gaza, and in the aftermath of their murders, their government forsook them.

Their names were oft-repeated—if not by follow citizens, then by citizens of the world—as events surrounding Israel’s horrific assault on the Gaza Freedom Flotilla were discussed. These two young and brave individuals were Rachel Corrie and Furkan Dogan....

Some may say that Corrie and Dogan were idealists who just got “caught up” in situations beyond their control or understanding.

They were not idealists, they were realists. They operated under simple, practical, honest principles: people’s homes should not be demolished by an occupying power; a besieged population has a fundamental right not to be denied food, medicine, clean water or shelter; collective punishment is inhumane and illegal.

Rachel Corrie and Furkan Dogan are American heroes. They were killed upholding human dignity, and their deaths were not in vain."
Posted by Tony at 9:10 AM